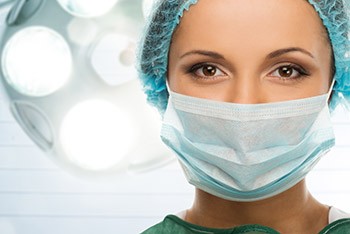 Summary: A surgical technician prepares the patient for surgery, sterilized the equipment, assists the surgeon with tools and instruments during the surgery, and maintains a sterile environment before, during, and after the procedure. According to the Bureau of Labor Statistics there is an outlook for 30% job growth from 2012 to 2022.

The operating room is a high-stakes environment, and it takes a tightly coordinated team effort to ensure that everything goes according to plan. While surgeons and nurses tend to get the lion’s share of the credit for successful surgical procedures, the vital support role played by surgical technologists is an indispensable part of a smoothly run operation.

What is a surgical technologist?

Most surgical technologists work in hospitals, but some hold positions in outpatient care centers or the offices of physicians and dentists. A good bedside manner is a major plus, as are strong attention to detail and excellent stress-management skills.

How to become a surgical technologist

The Occupational Information Network (O*NET) indicates that approximately two in five surgical technologists enter the workforce with an associate degree. O*NET also reports that about 31 percent of workers in the field attend accredited surgical technologist schools for their training and earn a postsecondary certificate.

While it may be possible to find surgical technologist training online, such as through a medical technology degree, there is typically a hands-on clinical component to the curriculum. Students can expect to complete at least a portion of their training at a local school, affiliated clinic or teaching hospital.

The Bureau of Labor Statistics (BLS) projects growth of 30 percent in employment opportunities nationwide for surgical technologists between 2012 and 2022, which is a rate much faster than the 11 percent average for all occupations and should lead to nearly 30,000 new positions in the field. The following states, which employed the highest numbers of surgical technologists in 2013, are also likely to see higher-than-average raw job gains in the next decade:

In addition, Utah (41.8% projected growth), Arizona (36.8%) and Colorado (36.3%) are among the states expected to have strong job growth between 2010 and 2020, according to Projections Central. Candidates who have completed an accredited surgical technologist degree program should have the best job prospects in the coming years, the BLS reports.

Location can also influence your earning potential significantly, but earnings are really only half the story. Salary figures that seem perfectly comfortable can be quickly offset by sky-high living costs. According to data provided by the BLS and the Missouri Economic Research and Information Center (MERIC), the following states are among the most favorable when it comes to the balance between surgical technologist income and local cost of living:

Employing industry and geographical location certainly factor into salary expectations, but education and experience are tried-and-true ways to bolster your earning potential. Learn more about local and online surgical technologist schools and degree programs and find out how they can help you find a rewarding career in the healthcare field.

Disclaimer: This article was shared for informational purposes only. ACHT is not responsible for any claims, advice or errors that might exist in the articles. Third party websites or analyses presented.

5 Steps to Help Prepare for a Medical Job Interview